iPhone 5S release date!Reviewed by Admin on May 13.Rating: -

Generally all the iPhones with the “S” after their number, have usually the same shell as their previous model and probably this will be the case for the iPhone 5S too. iPhone 5S will most likely have the same size as the iPhone 5, but it will definitely have a better camera and probably a slightly better and faster processor. Rumors say that Apple might skip the iPhone 5S model, and go straight to an iPhone 6. Now that most of Apple’s competitors released very powerful and great looking devices, Apple needs to follow up and produce an iPhone that it has great look and be very powerful.

When iPhone 5S will be released?

Apple “leaked” a rumor that they are planning to released an iPhone model that will be not that powerful and with cheaper materials, in order to get a share of the cheap phone market, but iPhone 5S will not be like that. The main goal of iPhone 5S release is to “fight” Apple’s competitors, because the smartphones have become essential part of our lives and their capabilities are constantly growing.
Many sources and leaks are estimating that the new iPhone 5S will be released during 2013 around September or October. During this period Samsung will also announce their third generation Samsung Note, and Apple want to hit them with their new powerful product.
One more reason to speculate that iPhone 5S will be released during 2013 is that Verizon has a discount for iPhone 5 models.

What iOS version will the iPhone 5S have?

This is a near 100% prediction for iPhone 5S iOS version, because Apple needs very badly to release their new iOS version and probably patch all the previous exploits and security holes that 6.1.3/6.1.4 iOS has. iOS 7 will be installed on iPhone 5S models and great updates and changes will be included.

Apart from the iOS version iPhone 5S will have features that the previous iPhone models did not have, like Wireless Charging and fingerpring reader.

Stay tuned and get updated for all the latest news about iPhone 5S. If you have any questions or feedback to provide us, feel free to leave us a comment and we will respond you as soon as possible. 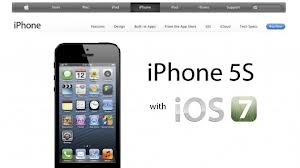