How iOS 7 will look like - Latest UpdatesReviewed by Admin on May 25.Rating: -

Many reports have seen the light during the previous weeks, and the good thing is that most of them are similar, which makes the posibility greater that the rumors of iOS 7 version to be true. Some of the rumors say that iOS 7 will use heavy textures and more black and white elements to its user interface. The main Apple’s intention is to make the iOS 7 version to fit 100% with the glass and aluminum look of their iDevices.

A few more “changes” leaked for iOS 7 version such as, the square grid for the passcode will change to a round one with black buttons and white borders. The lockscreen will also change, but not many details out there yet.

Apple will follow the same color path with the Notifications and they will have a black background with simple white text. iOS 7 version will have installed various widgets, like SBSettings, which will make it more easy for everyone to have quick access everywhere.

The Home screen will have many changes to iOS 7 version, like no more shining, shadows or gloss, but they will keep the same figure. iOS 7 version will “steal” a feature from Android and it will support scrollable panoramic wallpapers. We should expect a new design to the navigation and tab bars, and some of those bars might have a small blurring effect.

How Apps will look like in the iOS 7 version?

We all expect that, since iOS 7 version will have the Black and White combination, the Apps should follow that motive as well. The Mail, Calendar and Maps will definitely get such a look, a whilte flat look.

All the above are rumors about the iOS 7 version and only for its look. Definitely the latest iOS version will be more powerful than the iOS 6.x.x versions, and probably new features will be added.

If you want to stay updated about the latest news and the release date of the iOS 7 version, subscribe to our Weekly Newsletter for FREE. 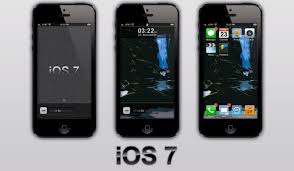