SayHi is one of Cydia’s latest sought after tweaks. You might have heard of something like this before. Other translators came up the market before like Vocre. Vocre does almost the same thing as SayHi but not the same accuracy as this new tweak.

SayHi is also very handy to use:

–         Pronto! Your word/sentence translated the way you need it by SayHi

If you want a professional translator, we highly recommend SayHi. You can grab one of this tweaks for as low as $0.99. SayHi offers at least 24 languages/dialects with Speech Recognition and at least 9 languages with voice (see list below). 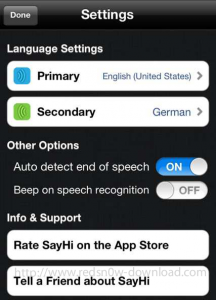 SayHi can be your first step to success! Become bilingual instantly by getting an interpreter on your pocket, no dictionary required!

Do you have any more questions on the latest tweaks? You can seek help from our experts at UltraSnow.EU. Sign up now as we bring the latest on your iDevices and what not.

Ready for jailbreak and unlock services? We expertise on the best tool for your iDevices. It does not pay to ask. Our 24/7 live chat support is waiting to answer all your queries. SayHi to our experts today.